The classiﬁcation of natural waters into optical water types, as with many other taxonomies, is done in order to generalize and systematize the science of ocean color. Arnone et al. (2004), in a review paper on water mass classiﬁcation, credits the Secchi disk (invented around 1865) as the ﬁrst quantitative optical instrument that has been used to measure water transparency and hence provided the ability to diﬀerentiate water mass based on their optical properties. Classiﬁcation schemes that are based on water color are primarily based on absorption (as scattering contributes to intensity but less to color).

The most common classiﬁcation schemes for water types are based on

The Forel-Ule Scale is a method to approximately determine the color of bodies of water. Diﬀerent inorganic compounds with standard formulas are used to produce a color palette with twenty one ﬂuid vials covering blue to green to brown. The analysis consists of ﬁnding the vial whose color best matches the color of the water body; the result is an index from 1 to 21. The method is often used in conjunction with the Secchi disk and is included in data bases such as (NOAA’s World Ocean Database. The method was developed in the 1890s by Francois-Alphonse Forel and William Ule. Although now replaced by instruments for quantitative work, the Forel-Ule color measurements are still of interest because of the ease of making measurements and the large database of historical observations, which has value for studies of long-term changes in ocean ecosystems (e.g., Wernand (2011)). There is now even a smart-phone app for making Forel-Ule measurements. Figure 1 shows the use of a Forel-Ule color scale to determine the color of the ocean by visually determining the closest match of the water color to one of the 21 Forel-Ule colors. 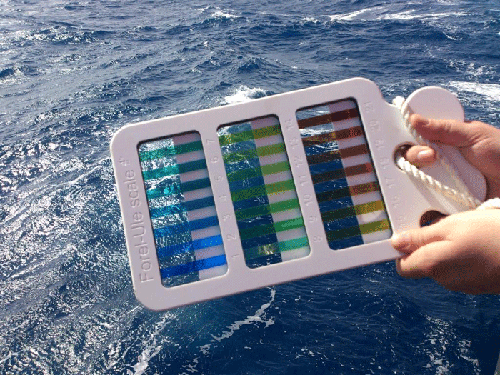 Figure 1: Using a Forel-Ule color scale to determine the color of the ocean. Photo from ICBM Uni. Oldenburg.

Figure 2 shows the locations of the 21 Forel-Ule colors on a CIE chromaticity diagram. The open circle is the white point. The open diamond is the CIE color of the remote-sensing reﬂectance as calculated by HydroLight using the “new Case 1” IOP model with a chlorophyll concentration of . The closest Forel-Ule value is 6. 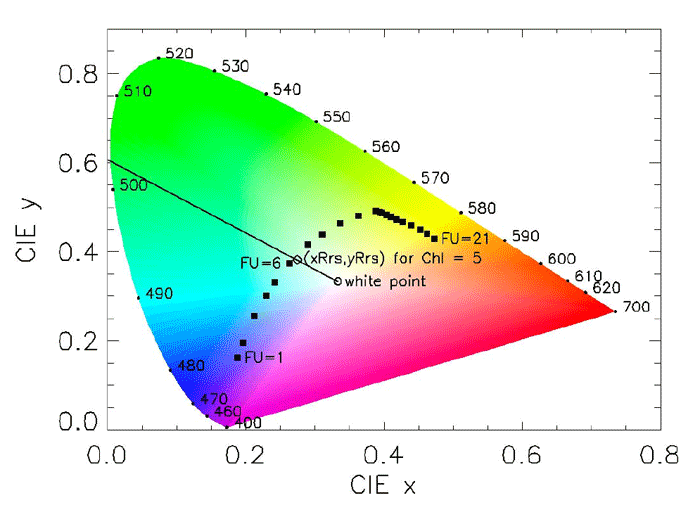 Figure 2: The locations of the 21 Forel-Ule colors on a CIE chromaticity diagram (black squares). The open diamond is the color of as calculated by HydroLight for a chlorophyll concentration of .

Another comparative scale is the Hazen Platin-Cobalt-Scale adopted as the American Public Health Association (APHA) color scale (described in ASTM D1209,“Standard Test Method for Color of Clear Liquids (Platinum Cobalt Scale)”). It is based on diluting a standard stock solution (500ppm of PtCo) and ﬁnding the dilution whose color best matches the ﬂuid compared.

Jerlov (1968) introduced a classiﬁcation of water bodies based on their spectral optical attenuation depth . Since ocean color is proportional to these spectra are linked to the color observed. Jerlov discretized his observations into a set of ﬁve typical open-ocean spectra, labelled I, IA, IB, II, and III, and nine typical coastal spectra, labelled 1 to 9 (e.g., Tables XXVI and XXVII in Jerlov (1976); these data are linked here).

The Jerlov water types can be deﬁned either by their irradiance transmission through a given thickness of water, or via the diﬀuse attenuation coeﬃcient averaged over a given depth. The left panel of Fig. 3 shows the spectra deﬁning the Jerlov types in terms of the irradiance transmission through 1 m of water. The right panel shows the corresponding spectra as the averages of over depths 0 to 10 m. 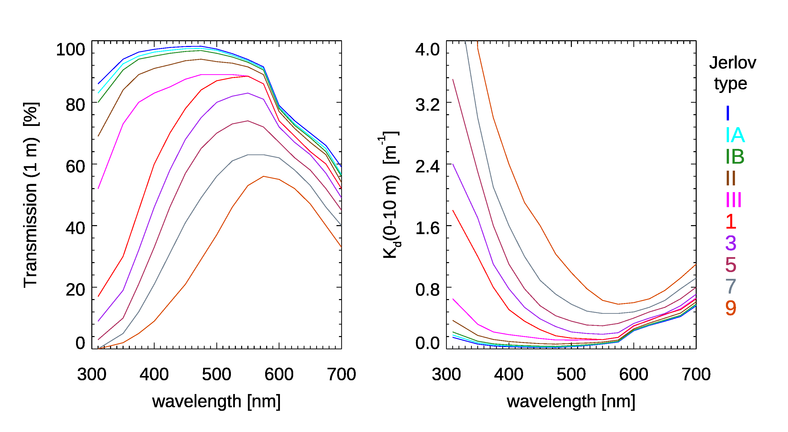 Figure 3: Jerlov’s water mass classiﬁcation based on transmittance through 1 m of sea water (left pane) or based on the average of over depths 0 to 10 m. Data from Tables XXVI and XXVII in Jerlov (1976)

Morel (1988) gives a very approximate correspondence between the open-ocean Jerlov types and the chlorophyll concentration:

Table 1: Approximate correspondence between the chlorophyll concentration and the Jerlov open-ocean water type.

Solonenko and Mobley (2015) give tables relating the Jerlov water types to a consistent set of absorption and scattering coeﬃcients (consistent in the sense that the IOPs, when used in HydroLight, generate spectra that correspond to the diﬀerent Jerlov water types).

Importance of Chlorophyll versus Other Components: Case 1 versus Case 2 Water Types

Morel and Prieur (1977) described the spectral shape of and its changes as separating two types of waters.

They found that “two extreme cases can be identiﬁed and separated. Case 1 is that of a concentration of phytoplankton high compared to other particles. In contrast, the inorganic particles are dominant in case 2. In both cases dissolved yellow substance is present in variable amounts. An ideal case 1 would be a pure culture of phytoplankton and an ideal case 2 a suspension of nonliving material with a zero concentration of pigments.”

Morel and Prieur emphasized that these ideal cases are not encountered in nature, and they suggested the use of high or low values of the ratio of pigment concentration to scattering coeﬃcient as a basis for discriminating between Case 1 and Case 2 waters.

The deﬁnitions of Case1 and Case 2 have evolved over the years into the ones commonly used today (Gordon and Morel (1983), Morel (1988)):

In Case 2 waters inorganic particles are relatively more dominant than phytoplankton. As the turbidity increases the following modiﬁcations appear:

1.
The reﬂectance values are generally higher than for case 1 throughout the spectrum and of a diﬀerent shape. There is no longer, as in Case 1, a minimum at 440 nm. On the contrary, the curves become convex between 400 and 560 nm (inverted ’U’ shape rather than inverted ’V’). The maximum is ﬂatter than in case 1, but located at the same wavelength, 560 nm.
2.
values become higher as turbidity increases. This is opposite of what was observed in Case 1, particularly for wavelengths above 550 nm.
3.
As a result of the ﬂat shape of the curves, the dominant wavelength does not shift beyond 510 nm. These waters are blue-green or green with a bright and milky appearance due to the combined eﬀects of high irradiance values and of low purity values.

Although the Case 1 versus Case 2 distinction has proven very useful, it can also be misleading. It must be understood that natural waters are not simply either Case 1 or Case 2; there is a continuous gradation of water optical properties (whether IOPs or AOPs) and their dependence on chlorophyll and other water constituents. It must also be remembered that “Case 1” and “Case 2” are not synonyms for “open ocean” and “coastal” waters.

Mobley et al. (2004) have even suggested that it is perhaps time to drop this type of binary classiﬁcation as it sometimes obfuscates more than it helps. For example, the same water can be Case 1 for absorption but Case 2 for scattering (e.g., if the water contains non-absorbing but highly scattering mineral particles), or it can be Case 2 for absorption and Case 1 for scattering (e.g., if the water contains a high concentration of highly absorbing terrigenous CDOM, which does not covary with the chlorophyll, and which does not aﬀect the scattering). Of course, water in the same area may be Case 1 during some time of the year and Case 2 in other times. Waters with similar chlorophyll concentrations may have large variations in ocean color in open ocean environment (e.g. Eastern Mediterranean vs. South Paciﬁc gyre). 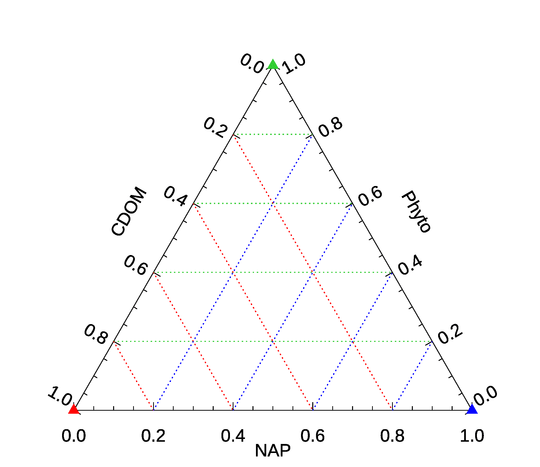 Figure 4: Example layout of a ternary diagram for displaying the relative contributions of phytoplankton, CDOM, and NAP to the total.

Figure 5 shows a point on a ternary diagram for the relative concentrations of phytoplankton as 0.65, CDOM as 0.2, and NAP as 0.15 of the total value. This point is shown by the black triangle. To determine the three contributions for a plotted point, follow lines parallel to the dotted lines of constant contributions back to the respective axes. This is illustrated by the red, green, and blue arrows, which are parallel to the red, green, and blue grid lines of Fig. 4. The open symbol at the centroid of the triangle shows the point corresponding to equal contributions by each of the three components. 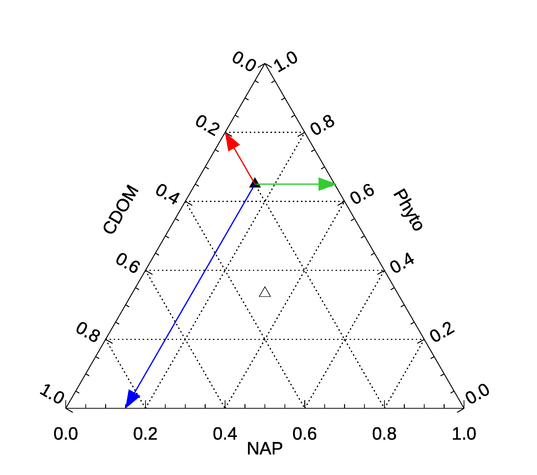 Figure 5: A ternary diagram showing the relative concentrations of phytoplankton as 0.65, CDOM as 0.2, and NAP as 0.15 of the total value.

An example of ternary diagrams applied to absorption is given in Figure 16 of Babin et al. (2003b). Those plots show the absorption contributions at various wavelengths for European coastal waters. Their diagram shows well how at diﬀerent wavelengths diﬀerent constituents (dissolved material, algae and non-algal particles) dominate absorption.

The preceding discussion has outlined the most commonly used classiﬁcation schemes for natural waters. However, a number of other classiﬁcations have been developed and used for various applications. Representative schemes have been based on